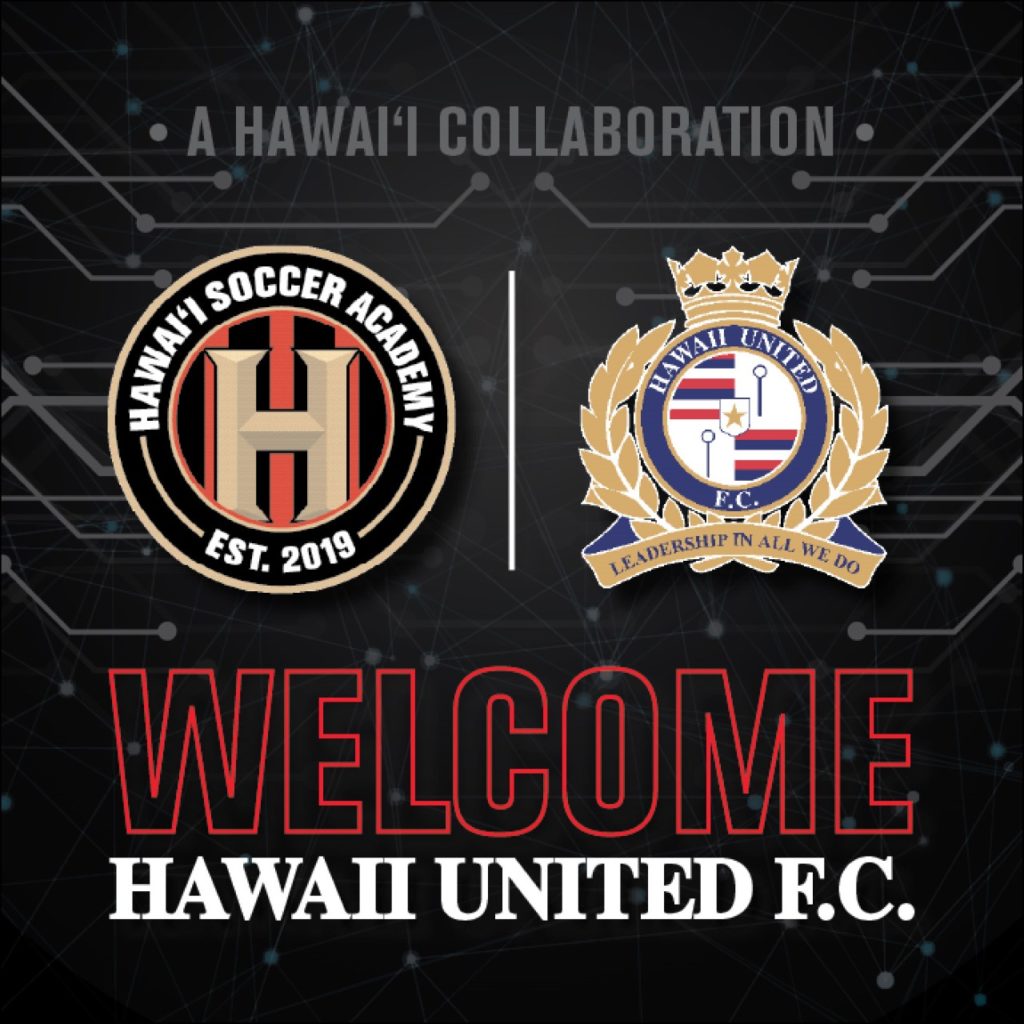 The Hawai’i Soccer Academy and Hawai’i United F.C. today announced that they have entered in a strategic partnership that will benefit youth soccer players island-wide. This collaboration comes on the heels of the announcement of Hawai’i Soccer Academy being recently chosen as a US Club Soccer ‘Players First’ Club, the only club in the state to receive this honor.  Both Oahu-based organizations recognized the need to bridge the geographical gap for kids across the island to receive top level licensed coaching, as well as more diverse opportunities in regards to expanded player pools, playing opportunities in league games and tournaments, as well as off-island travel opportunities. In addition, college coach exposure, coaching education, operational assistance, and working together to create a top level tournament are all in the works.

Club Directors James Escobar Sasiadek and Mohamed Doma have visions of creating ‘something different’ in the soccer community. “We want to help each other as two different organizations, without fear of losing players or coaches, or some of the other things that happen in our soccer environment.” mentioned Hawaii Soccer Academy director Sasiadek. “We will instead be able to supplement, support, and succeed together by extending both of our clubs’ resources. At Hawaii Soccer Academy we have slowly built a formula for success, and have expanded to east Oahu, Waipio, in addition to our West Oahu home base.  After meeting with Mohamed, he has started something really special in town, with almost identical visions for the short and long term future for his kids, and with the quality coaching staff he is putting together, I am assured Hawaii United will have success.”

Hawaii Soccer Academy founder James Sasiadek added, “As many who live on the island of Oahu can attest, traffic and practice locations can be a challenge for families island-wide. With this partnership players from both clubs will be able to play and train for either H.S.A, or Hawaii United FC during the week depending on their location and age group, as well as games on the weekends, and local and mainland tournaments. Having multiple field locations across the island will also allow for scrimmages, coaching educational sessions, and a convenience for parents which is paramount.”

Hawaii United FC President, Mohamed Doma stated, “This partnership provides the way forward for soccer in Hawai’i.  The opportunities for our clubs increase many fold when we cooperate in a positive way and focus on our players first.  This is an exciting opportunity that we could not bypass and H.S.A. has proven to be one of the premier soccer organizations on the Island of Oahu, by doing things the right way. We are very optimistic that our parents and players will take advantage of all of the benefits and opportunities that this partnership provides to both clubs.”

Hawai’i Soccer Academy, serves nearly 300 athletes across the state, and currently has 24 competitive teams, ranging from 2003 to 2014 born, both boys and girls. In addition to a highly recognized “keiki” academy program, the club has produced numerous top teams, ODP National, Regional, and State players, USYS State Cup Champions, National Soccer Showcase Champions, and will graduate its first class of college recruits in 2021.

One of the fastest growing clubs in the Hawaiian Islands, their dedicated staff of Nationally Licensed coaches help promote the game thru an organized, structured, and age appropriate soccer curriculum for its members. They were recently selected as the only club in the state of Hawai’i to be a US Club Soccer ‘Players First Club’.

Hawaii Soccer Academy, continues to work tirelessly to provide opportunities within the state, and has now built professional pathways, university and college pathways, and career guidance for all of the H.S.A. athletes, outside of the islands.

The Academy is presently in the works to provide top facilities for their athletes to train island wide, with eyes on planning and organizing a future tournament to showcase the talent and quality within the Hawaiian Islands.

Hawaii United F.C. is the newest soccer club on the Island of Oahu and serves the Metro and east areas of Honolulu.  The Hawaii United F.C. coaching staff boasts an array of coaches whom have played internationally, and provide a level of technical and tactical expertise rarely found on the island. The Club was founded on a simple premise: namely, if you want your child to reach his/her full potential, then you must give them the right tools to succeed, which begins with the right developmental style of competitive coaching and training.

The mission of Hawaii United FC is to focus on the development of competitive teams.  Our training emphasis will be on the technical, tactical, physical and psychological elements of game play. This starts with personalized assessments, development plans, coaching models, and competitive training.

The Hawaii United FC way is supportive and developmental in approach, this takes into consideration the developmental capacity of each player, and their readiness for competitive play. We have created a positive environment where each player can grow, learn, make mistakes and succeed without fear, or trepidation!