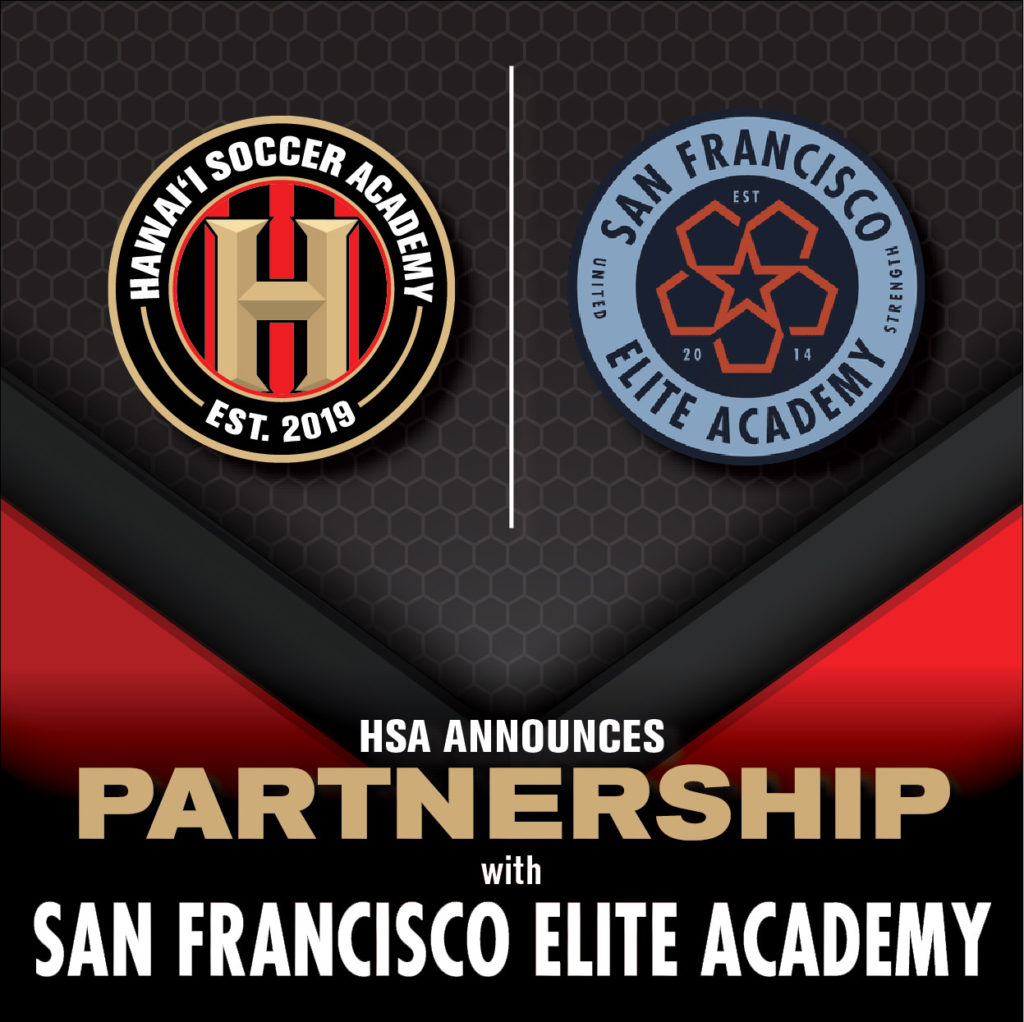 The Hawai’i Soccer Academy, located in the Aloha State, today announced that they have entered in to a strategic partnership with San Francisco Elite Academy, the top premier club in San Francisco. The Northern California club, with a staff of over 19 nationally licensed coaches, including multiple Division 1 College coaches, recently gained acceptance to the Major League Soccer (MLS) Youth Development league, the top boy’s platform in the country. The agreement also comes just days after the San Francisco club was announced as a founding member to the recently launched Girls Academy League. The partnership will allow Hawai’i Soccer Academy players direct opportunities to play in both Showcase Events and league games, on both the girls and boys sides, with exposure to top professional scouts, national team scouts, and college coaches alike.

The clubs have agreed to help further establish Hawai’i Soccer Academy’s vision to provide opportunities outside of the Hawaiian Islands, and with this cooperative business relationship, it will enhance the ability to be even more efficient in the promotion of Hawaii’s soccer players.

“Providing a pathway for the kids from Hawai’i is a huge priority of ours, and this wonderful opportunity was something we couldn’t be more excited about,” mentioned James Escobar Sasiadek, President of Hawai’i Soccer Academy. “I have known Joe Dugan, the Founder of S.F. Elite, since early 2015 when we both attended a U.S. Coaching Course together at S.F. State. He and his exceptional staff have built the top club in San Francisco, and have become one of the most recognized clubs in the country. Joe and I have always talked about working together to help Hawai’i kids gain more opportunities and pathways to professional and college teams, and with their clubs recent acceptance to the boys MLS league, and girls GA league, in addition to his clubs outstanding college pathways, we both agreed now was the time to make the dream a reality.”

Joe Dugan, President of S.F. Elite, added, “I am quite familiar with Hawai’i youth soccer, and after speaking in depth with James, we couldn’t be more excited to partner with Hawai’i Soccer Academy to offer kids from the islands a chance to play against top level competition here in California, and beyond. Both clubs want to provide as many opportunities possible for our kids to succeed in their soccer and education goals, and we are very happy to help in any way possible! At S.F. Elite we are very proud of our strong college advisory program, which is now available to those Hawaii Soccer Academy athletes needing guidance, and opportunities to be seen by some the top universities in the country.”

Tom Atencio, S.F. Elite Director of Player Development and Girls Academy Director, said “I see great value in joining forces with the Hawai’i Academy as it will help both clubs in terms of player and team development, which has always been a focus and a core value here at S.F. Elite. We are in talks to collaborate on tournaments both in San Francisco and Hawai’i, which would certainly benefit both clubs. Despite the obvious paradise location that an H.S.A. tournament would provide, being able to build a top class tournament that could potentially draw in teams from across the country, and even internationally is something we are excited about.”

The San Francisco Elite Academy is a nationally recognized soccer club founded in 2014. The club is a founding member of both the MLS Youth Development League and Girls Academy League and their teams annually compete in the NorCal, NorCal State Cup, NorCal NPL, and NorCal Champions League. They are the ONLY San Francisco club with Automatic NPL entry for both boys and girls at U12.

The SF Elite Academy staff of directors and coaches rank among the most respected in the entire region. They boast vast coaching experience, including 8 U.S. Soccer Federation ‘A’ licensed coaches, 7 U.S. Soccer Federation ‘B’ licensed coaches, as well as numerous current and former Division 1 College coaches. Many of the SF Elite coaches work in the college and high school ranks, lead ODP and PDP teams, and have national teams experience.

The club also has a direct path and partnership with San Francisco City FC (Men’s USL-2 Pro League) and San Francisco Nighthawks (Women’s WPSL). They consistently place top teams into the best tournament and showcase competitions in the nation (e.g. Surf Cup, Jefferson Cup), giving players the platform to be seen by college recruiters and be on the path to play at the next level. They have sent numerous athletes to colleges and universities across the country including Stanford University, Brown University, University of San Francisco, UC Davis, University of Washington, University of Portland, and Colgate University to name just a few.

Hawai’i Soccer Academy, located on the island of Oahu, serves nearly 300 athletes across the state, and currently has 22 competitive teams, ranging from 2003 to 2014 born, both boys and girls. In addition to a highly recognized youth academy, the club has produced numerous top teams, ODP National, Regional, and State players, USYS State Cup Champions, National Soccer Showcase Champions, and will graduate its first class of college recruits in 2021.

One of the fastest growing clubs in the Hawaiian Islands, their dedicated staff of Nationally Licensed coaches help promote the game thru an organized, structured, and age appropriate soccer curriculum for its members.

Hawaii Soccer Academy, continues to work tirelessly to provide opportunities within the state, and has now built professional pathways, university and college pathways, and career guidance for all of the H.S.A. athletes, outside of the islands.

The Academy is presently in the works to provide top facilities for their athletes to train island wide, with eyes on planning and organizing a future tournament to showcase the talent and quality within the Hawaiian Islands.